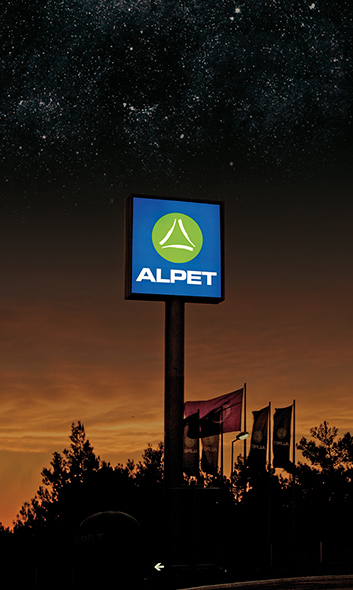 Alpet Turkey was commissioned by Altınbaş Holding in 2001 after foundation of Alpet Cyprus in Cyprus.

Commissioning filling stations in Mersin and Gulf in Turkey, in 2002 Alpet Turkey commissioned Kırıkkale Filling Station in 2004. Continuing its uninterrupted operations following these commissioning, Alpet Turkey hen commissioned Samsun an Aliağa Filling Stations in 2005 and that had been an in a debut in operation on another business arena. Awarded as the successful bidder in the public tender for the first time in the2006, Alpet Turkey began to invest on its brand with the national campaigns initiated the same year.

Providing new product ranges and services to accommodate the change in requirements, Alpet Turkey launched Alpet Torojet products in 2007. Having achieved to significant progress in the market thanks to that product, Alpet Turkey intensified investment and became a sponsor of Fenerbahçe, Galatasaray, Beşiktaş, Trabzonspor football clubs and main sponsor of Göztepe football club. Having observed due diligence in training its technical staff right from its establishment, Alpet Turkey entered into cooperation with the Turkish National. Ministry of Education.

Having initiated the services for fleets and corporate vehicles within the scope of Vehicle Management System in 2008, Alpet Turkey has taken a big step in promoting to the leadership in its market by its membership to Petroleum Industry Association (PETDER).

Alpet Turkey was awarded with ISO 9001:2008 Quality Management System, ISO 14001:2004 Environment Management System and OHSAS 18001:2007 Worker Health and Work Safety certificates on account of the standard its country-wide premises and headquarter in 2010. Following issue of these certificates, Alpet Turkey equipped all its station with the data processing infrastructure. Meanwhile, it took a step towards partnership of Opet and Lukoil with the commissioning of its Akdeniz Petroleum Filling Station.

Working hard day by day to increase the number of its filling stations, Alpet Turkey operates 400 stations throughout Turkey. Having privilege of providing fuel replenishment on behalf of all marine vehicles in operation within national coast-trade, Alpet Turkey also observes due diligence in providing direct fuel supply with its fuel supply tankers with and without SCT. Being aware of its responsibilities against the society, environment, employees, dealers and business partners, Alpet Turkey observes the principles provided by SEÇ-G codes in its all filling stations.

With its groundbreaking initiatives in the Turkish fuel market thanks to its vast business experience, dynamic staff, swift and perfect service approach to service, Alpet Turkey continues to grow stronger.

First Award in Public Tender. ALPET’s promotion to leading public suppliers in the course of time.

Cooperation Protocol was executed with Ministry of National Education, Republic of Turkey, in regard to training employees in fuel sector and ensuring sustainability in high service quality provided within ALPET filling stations.

The services have been initiated on behalf of fleet and corporate vehicles under ALPET Vehicle Management System.

All filling stations have been provided with data processing infrastructure.