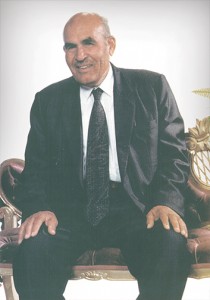 Laying the foundation of Altınbaş Holding, an organization that creates differences on a global scale, Mehmet Altınbaş was born in Gaziantep to a farming family in 1923. Mehmet Altınbaş’s first debut in commerce was purchase and sale of the coal when he was only 10 years old. Working hard he became an expert with commercial intelligence and an ability to climb further in the business.Mehmet Altınbaş completed his military service and returned back to his home town to deal with the pistachio business. Developing projects in the business, he decided to plant new pistachio saplings and soon he had about 2000 trees in his first initiative. It is presumably the experience he obtained in his first steps in the business outlined in his saying, “big targets are achieved by small steps”.

Having married Fatma Altınbaş in the 1950 s, the Altınbaş Family had altogether 9 children, of which 6 boys and 3 girls. Being happy with his family, putting his signs under exclusive successes in his business life, Mehmet Altınbaş perceived the significance of Cyprus in 1970s in terms of the commerce and initiated gold business in with his children in Cyprus. Increasing the number of its outlets to 7 in short time, Altınbaş Family established first wholesale operations and gold premises in 1985 and 1988, respectively. They witnessed the pride of a significant level of employment within its premises.

Upon significant development in its business involvement, the family initiated operations in banking, petroleum and construction business in Cyprus, which arise enthusiasm about these projects in Turkey.

As a founder of 25 well-known Altınbaş Holding brands ranging from energy to logistics, jewelry to finance in operation throughout the world in 2003 Mehmet Altınbaş left eye-catching accomplishments and advice that will never be forgotten:

To come together is a success.

To stay together means progress.

Working together is the way to success.