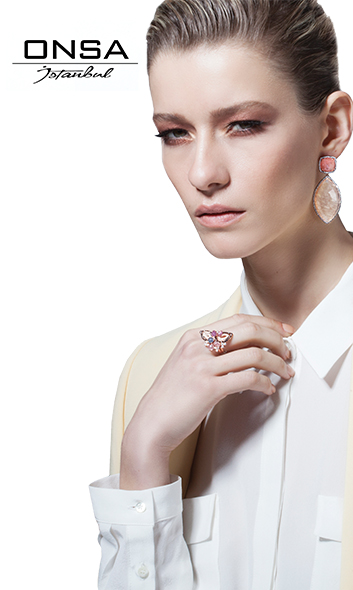 Onsa Istanbul was founded in Sultanahmet, Istanbul in 1993. Right after its foundation, Onsa Istanbul concentrated on expanding corporate activities and soon turned in to a huge plant with an encolesed area of 15,000 square meters enclosed area in 2004.

Upon reconstruction in regard to sales, design and production processes Onsa Istanbul initiated considerable reorganization. Establishing the product development department in the same year, Onsa Istanbul formed a design team consisting of 30 employees and equipped the plan with state-of-art technologies. With the aim of being on of the 10 biggest producers in the jewelry business in 10-year period, Onsa Istanbul worked harbreaking and d to achieve success.

Onsa Istanbul is ground breaking and in 2012 and ranked in first three companies in Turkey according to the Istanbul Precious Mineral and Metal Exporters Association (IPMMEA). Onsa Istanbul ranked 181st in the ISO 500 listing of 2013.

Today, operating with regard to attaching prime importance to customer-focused design for the main purpose of customers’ satisfaction, Onsa Istanbul exportations to 20 countries in 3 continents 8K, 9K, 10K, 14K, 22K and 925 products.Exporting 85% of its production, Onsa Istanbul contributes of US$40m to the country’s budget.

Production inaugurated in 15,000 square-meter plant, where the foundation was laid in the biggest plant in the field of jewelry.

The reconstruction process was initiated in sales, design and production. Comprehensive reorganization works have been initiated in every branch.

Production development department was established. State-of-art prototype machinery was provided, which will ensure the difference, high quality and increase in rate of production.
The highest competitive and biggest staff have been formed.

State-of-art technologies were adopted to introduce difference in the production in an efficient manner for the purpose of being leading company in world-scale competition.

ONSA Istanbul brand name was adopted for a brand-new vision. The target is established for ranking in fist 10 biggest company of the world in jewelry business in 10-year time.

Thanks to the volume of exportation targeted in the world market, Onsa Istanbul ranked 3rd place in Istanbul Precious Mineral and Metal Exporters Association (IPMMEA) listing.